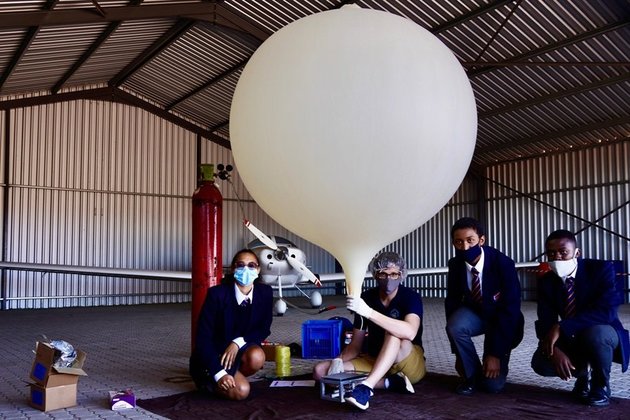 The world's next generation of scientists celebrated Earth Day doing what they love best - exploring the boundaries of their world through an innovative experiment.

Earth Day is commemorated annually on 22 April, with the global awareness day aimed at highlighting our role in protecting the planet.

Around 300 pupils gathered online and in-person at Saldanha Airfield to launch two high-pressure balloons for a scientific experiment.

The experiment allows the pupils access to the latest technology for data analysis and collection, payload launching and weight management as well as remote sensing and tracking.

The launch forms part of the global ExoLab programme.

It connects students in classrooms around the world to scientists conducting innovative experiments on the International Space Station (ISS), investigating solutions to real-world problems. There are around 300 South African pupils from six schools participating in the programme.

The Earth Day balloon aligns with a global ExoLab experiment on the ISS, aimed at deepening their understanding of a range of math, science and tech concepts.

In 2018, I-Innovate and IT service provider Tata Consulting Services South Africa launched ExoLab in South Africa, and South African pupils have been involved in a variety of experiments and real-time engagements with international scientists and astronauts since then.

This is an exciting opportunity for our students not just to commemorate Earth Day in a meaningful way but have real, hands-on experiences, navigating scientific enquiry and problem solving with local experts and mentors.

"Two InterMet high-pressure balloons [were] launched, each carrying a styrofoam payload that houses the data collection and sensing devices. The balloon flight [takes] approximately two hours and is expected to ascend to an altitude of 30 000m above sea level," she added.

The experiment saw pupils placing different objects inside payloads to observe the effects of altitude and atmospheric pressure.

Kasongo Tshibombu, a pupil at the Cape Academy of Maths, Science and Technology, said his team placed a watch inside their payload to measure the effects of altitude and magnetic force on time. He added the experiment also gave a nod to Earth Day, as one of the payloads had contained an insect. Pupils would then measure the impact of the atmosphere on the insect, which could provide information of how climate change might affect similar animals.

Fellow pupil Jesse Bull said her payload contained a piece of steel in a vinegar solution, which would allow her to record the effects of the atmosphere and altitude on oxidisation.

"I feel honoured to participate in the experiment. It's an interesting learning experience, to understand how the atmosphere and altitude affects different things," she added.

Once at their peak, the balloons burst, and the payload box falls back to Earth. Students track the flight in real-time and recover the payload boxes.