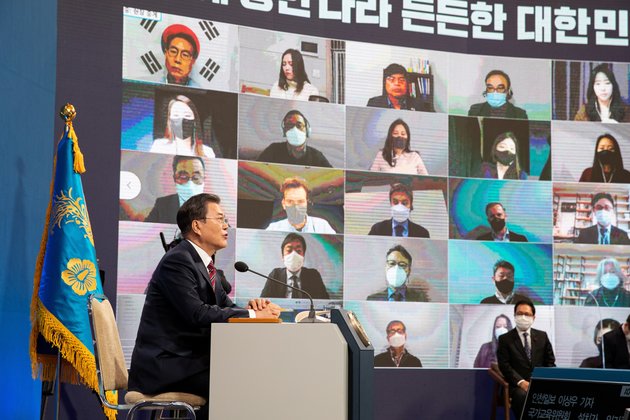 "America is back," Moon declared in a congratulatory message marking Biden's inauguration. The statement didn't directly mention outgoing President Donald Trump, but the intent was clear.

The U.S.-South Korea alliance underwent a period of open tensions under Trump, who often used blunt language, insults, and threats to pressure Seoul to pay more for the cost of hosting nearly 30,000 U.S. troops.

Much to Moon's relief, the military cost-sharing friction will likely subside under Biden, who recently called for an end to "extorting" Seoul over the issue. But some analysts warn another major alliance disagreement could soon emerge over how to handle North Korea.

Improving relations with North Korea is a legacy-defining issue for the left-leaning Moon, a former human rights activist whose parents fled the North as war-time refugees.

But Moon, whose five-year presidential term ends next May, is running out of time to achieve inter-Korean peace. Although he has vowed a final push to renew talks, progress will be difficult without the support of Biden, who is consumed with the coronavirus pandemic that has killed more than 420,000 Americans and devastated the U.S. economy.

It's not just an issue of Biden being distracted. At times, Biden and Moon appear to have important differences about whether and how to engage North Korea at all.

During his presidential campaign, Biden repeatedly referred to North Korean leader Kim Jong Un as a "thug," "tyrant," and "dictator." Biden has suggested he wouldn't meet Kim without progress on North Korea's denuclearization.

Although the Biden administration hasn't yet decided on a North Korea strategy, Antony Blinken, who is set to become secretary of state, says the United States would consider using both diplomacy and increased pressure to convince North Korea to return to negotiations.

FILE - Police officers use umbrellas to protect themselves from the sun while anti-war activists hold a rally against planned South Korea-U.S. annual joint military exercises near the U.S. embassy in Seoul, Aug. 5, 2019.

A more adversarial U.S. stance toward North Korea would likely upset Moon and his allies in Seoul.

At a news conference last week, Moon said the starting point for Biden should be the 2018 Singapore agreement between Kim and Trump, in which both sides agreed to "work toward the denuclearization of the Korean Peninsula."

In an op-ed piece last month, South Korean special presidential advisor Moon Chung-in struck a pessimistic note on Biden, raising the possibility he could increase military pressure and sanctions on the North.

"There's no guarantee that the beginning of the Biden era will bring back the peaceful world order we've been longing for," wrote Moon, who is also a professor emeritus at Seoul's Yonsei University.

Those concerns may not stop South Korea from trying to improve ties with the North anyway.

In recent weeks, South Korean officials have hinted they would like U.S.-South Korea joint military exercises, which are planned for March, to be canceled or scaled back as part of an attempt to reduce military tensions with North Korea.

"The Moon administration, being ever so optimistic about their North Korea policy, are [sic] sensing some sort of opportunity here," says Go Myong-hyun, a research fellow at Seoul's Asan Institute for Policy Studies.

A possible plan, according to Go, is for Moon to move ahead with North Korean engagement, essentially daring Biden to object.

"By forcing issues on Washington, by saying, for instance, that North Korea has agreed to meet with us, and what are you going to do to stop us...I think the Moon administration feels they can take the initiative here," he says.

But will it work?

That kind of push for talks would in some ways mirror 2018, when Seoul successfully converted inter-Korean sports cooperation at the Winter Olympics into a series of North-South meetings, which eventually led to the Trump-Kim talks.

But there are plenty of reasons to question whether such a move would work this time. The most obvious: the Olympics may not be held at all because of the coronavirus. If the games were held, host Japan may not agree to participate in the talks.

"I'd be shocked if his plan worked again because the environment right now is completely different," says Duyeon Kim, a Korea specialist at the Center for a New American Security.

"It was easy to trick Trump into a summit with Kim because Trump loves theatrics and a good photo op," she adds. "Biden is too smart, experienced, and serious about national security."

How will North Korea respond?

In any case, North Korea may not even agree to resume dialogue. For months, Pyongyang has boycotted meetings with both the United States and South Korea, upset among other things that Washington has not relaxed sanctions on its nuclear program.

At a major political meeting this month, North Korea said it was looking for ways to improve relations with the South, but called on Seoul to stop holding military drills with Washington and to stop acquiring new military capabilities.

North Korea has also showcased several new weapons over the last few months, including a massive new intercontinental ballistic missile, as well as a ballistic missile possibly designed to be fired from a submarine.

Some analysts have expressed concern North Korea could soon test one of those new weapons, or possibly conduct another nuclear test, noting Pyongyang's tendency to showcase new military capabilities around the start of U.S. administrations.

Staying on the same page

Another concern among some analysts is that such a major test by the North could sharpen divides between Biden and Moon.

"I hope Seoul and Washington can stay on the same page, because it's going to be challenging. North Korea will continue to pressure South Korea, and there's only a year left from the Moon administration's perspective," said Sue Mi Terry, a Korea expert at the Center for Strategic and International Studies, during a recent online forum.

Some in Seoul are more optimistic, expressing hope Biden and Moon will find enough common ground.

Lee Juhyun contributed to this report.