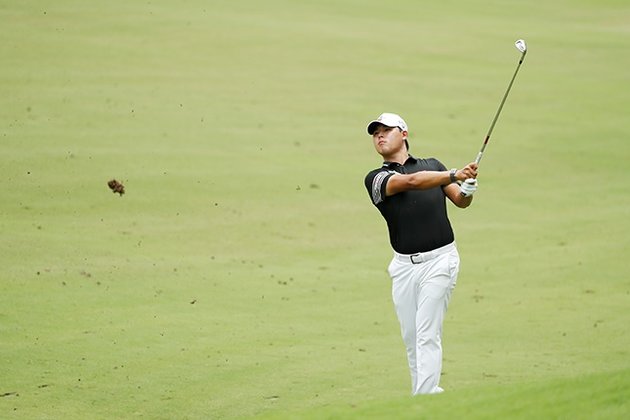 South Korean Kim Si-woo rolled in back-to-back birdies at 16 and 17 to overtake sizzling Patrick Cantlay and win the PGA Tour event in La Quinta, California, by one stroke.

Kim, who started the day sharing a one-shot lead with Max Homa and Tony Finau, fired eight birdies in an eight-under par 64 for a 23-under total of 265.

Cantlay had stormed to a narrow clubhouse lead with 11 birdies in an 11-under par 61 - a course record on the Stadium Course at PGA West and enough to put him one ahead of Kim as the South Korean was coming up the finishing straight.

Kim regained a share of the lead with his seventh birdie of the day at the par-five 16th, where he reached the green in two and two-putted from 50 feet - leaving himself less than four feet for birdie.

At 17, Kim poured a 19-foot birdie putt into the heart of the cup to regain the lead.

"No. 16, I really needed a birdie to make the playoff, and after I made the birdie on No. 16, I felt more confident. I felt more comfortable. So I tried to hit it more confidently on 17's putt, so that's how I made it," said Kim, who polished off the win with a textbook par at the par-four 18th, his final stroke a tap-in.

The 25-year-old from Seoul notched his third US PGA Tour title, but his first since the 2017 Players Championship.

"I tried to keep (my) composure and I made it. I'm so happy with that."

Kim, who pulled out of last year's tournament in the desert east of Los Angeles with a back injury after a tough first round, had consolidated his position with four birdies on the front nine and added two more at 10 and 11.

But Cantlay was in hot pursuit. He got going with a five-foot birdie at the second and added three straight at the fourth, fifth and sixth - where he rolled in a 33-footer.

After birdies at 11 and 13 he drained another long birdie at the 15th and tied for the lead with a birdie at 16.

Kim said he was watching the leaderboard and knew where Cantlay was. But he also knew he had plenty of birdie opportunities on the back nine.

It was a further two strokes back to Australian Cameron Davis, who fired a 64 for solo third on 268.

Finau settled for a 68 that left him alone in fourth on 269 while Homa endured a tough day in the final group, carding a four-over 76 that left him 11-over for the tournament.

Leading scores after Sunday's final round of the PGA American Express tournament at La Quinta, California (par-72, USA unless noted):